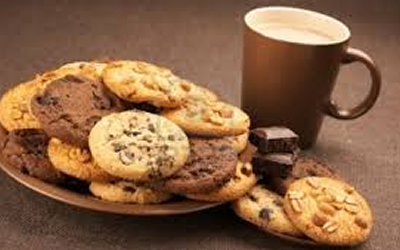 After Dinner Snacking….what’s up with that?

I’ve always heard people talk about the challenge of quitting those evening snacks. It’s usually one of the first things that people want to quit when they are working on weight loss and emotional eating goals.

A common thread among most evening snackers is that the person feels an URGE to eat.

What causes this urge, you ask?

OK, so this is like when a dog hears you go into the kitchen and he immediately gets excited because he thinks he’s going to get food, only the food has not yet made an appearance.

The dog naturally reacts to food. Food is the stimulus. The kitchen was neutral until the dog learned that his food comes from the mysterious place that the humans always go to after dinner to get snacks…..

Now, the dog associates anything going on in the kitchen with food.

Patterns of the Past

I’ve often heard people talk about the patterns of eating that they acquired in their family of origin, or throughout the course of a marriage. People bond socially over food, and food is often a language of love and comfort. It can also be a source of guilt if one chooses not to join the other person in their eating (peer pressure). I’m only scratching the surface here, but you get the idea.

There are also patterns that form just from visual cues, situations, other people, the environment (such as being in the living room sitting on the couch).

Breaking an eating habit such as evening snacking requires changes in these cues, such as sitting in a different place in the room, or not watching television but finding other things to do….spy on yourself and see what changes you can make in order to break the patterns of these cues.

Also, think about the social and emotional bonds that you might have formed over food. I’ve heard of people choosing to play a game of cards or walk the dog rather than eat snacks. They are still bonding socially, just not bonding over food.

If you are a person who, as they read this, thinks, “No, the urge to eat is much stronger than that, to the point where it’s uncontrollable,” then you may be dealing with some other issues more related to anxiety. If you have read other articles on this website, you might recall reading about how food is one of the very first ways that we seek autonomy as an infant. You are driven on a primal level to eat, and to have control over the physical process of eating. You put the food into your own mouth. That’s control.

In the experience of anxiety, one feels a need to control in order to feel safe. If a person is experiencing binge eating, there is most likely a trauma history (neglect, abuse, etc.) and also anxiety. This is treatable and you can get better.

A lot of times people binge eat in the evening when the house is quiet and they are in bed, alone with their thoughts. Sometimes the urge wakes them up after a short period of sleep, or in the shower. These are times when the anxiety sneaks up and demands control, triggering an eating response.

A person might binge eat when they are bored, or when no one is around. A person does not have to be doing binge/purge (when the person makes himself vomit). Many times, people binge and do not purge.

Theses are only a couple of reasons why people snack in the evening. If you are struggling with this issue, just start out by taking note of your thoughts, emotions, physical sensations, and the intensity of the urge. It will help you to build awareness of the issue so that you can choose the next step, whether it is setting up a different evening routine, or getting help from a mental health professional (like me!)